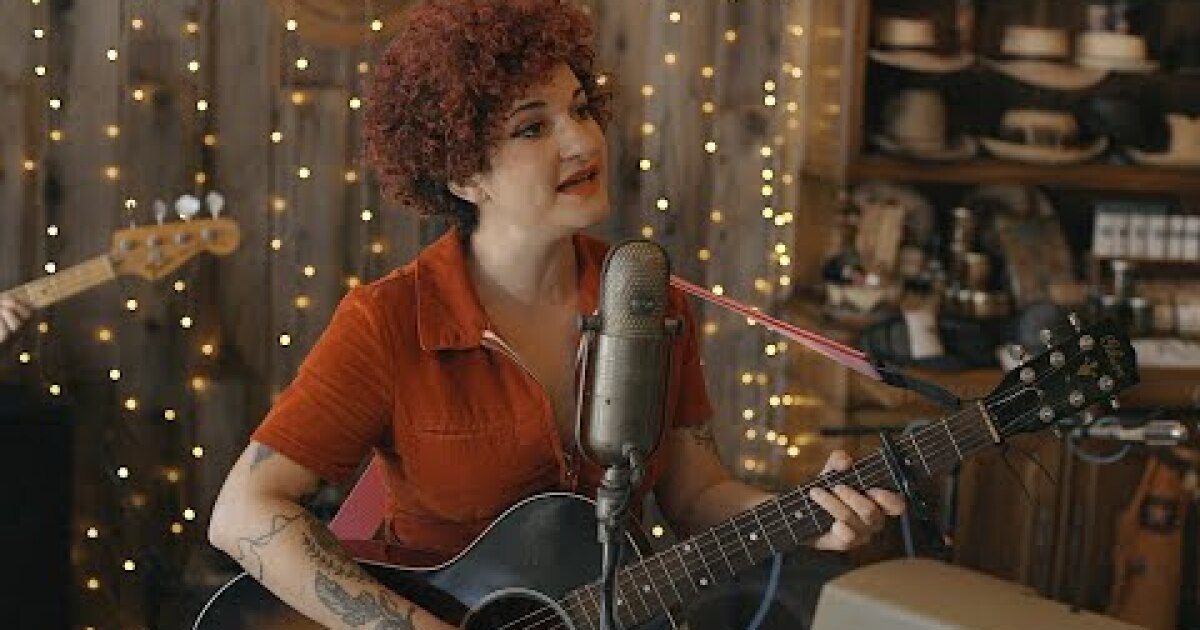 “Americana” is a widely accepted term to describe a particular genre of country/folk roots music. It’s also a pretty good description of the vibe of Tomboy, the vintage clothing store on Soquel Avenue right next to the Rio Theater.

That’s why “The Tomboy Sessions” makes so much sense.

The Tomboy Sessions is the name given to a series of music videos featuring musicians performing a live song, right in the middle of boots and ponchos in Tomboy’s retail space. The latest in the series is new this week and features singer-songwriter Carsie Blanton and his band performing a dreamy country tune called “Be Good.”

The series is not new. In fact, it’s been going since 2016 and has produced a dozen in-store videos since. But, like so many other great companies, it has been derailed by the pandemic. Blanton’s video marks something of a resurrection of the Tomboy Sessions with a crucial new musical partner, hip Santa Cruz music venue Moe’s Alley.

“We’re back,” said Andy Zenczak of Santa Cruz’s Gadget production company, who did the sound engineering for the series. “And it feels like there’s a big momentum as well. So that’s a good thing.

The idea behind the reboot of the series is to present a new video regularly, a kind of “Tomboy Tuesdays” on the first Tuesday of each month.

“(Before) it was a bit sporadic,” said store owner Tomboy and host of the series Summer Duppen. “It was a few times a year, whenever we could fit it in. With (Moe) on board, the team is kind of rejuvenated and inspired to make it a more regular thing and keep it fresh with new content. all the time .”

Sylvan Music, Santa Cruz Guitar Company, and cannabis dispensary KindPeoples are also on board as series sponsors. TourMore and Seafoam Films are teaming up with Gadgetbox and Tomboy as producers of the videos.

BOLO is our interactive tool to keep you up to date. Here are your three key places to bookmark:

The dozen pre-pandemic videos shot for the series are available for viewing at Tomboy’s Youtube. The channel currently features a dozen videos from artists including blues duo Little Hurricane, country singer Jesse Daniel and Santa Cruz band the Carolyn Sills Combo. And it is on this platform that new videos will also land every month. Among the Tomboy videos slated for release in the coming months will be Bay Area singer-songwriter Nicki Bluhm, Portland band Jenny Don’t & the Spurs and Santa Cruz native Taylor Rae ( now living and working in Austin, Texas).

Although she makes her living selling clothes, Summer Duppen of Tomboy says she’s always been a big fan of music. “I have Willie Nelson shrines in my store,” she said, “and I was really raised with Emmylou (Harris), Joni Mitchell and Willie. I love singer/songwriter stuff. J like loud rock ‘n’ roll. I like all of that.

Brian Ziel, co-owner of Moe’s Alley, said he was delighted his club was part of the series. “We can just check our calendar and generally see what kind of artists fit the mood of the store,” he said. “And we will eventually embed the videos on our website and share them on social media. Yes, we are proud to be part of it.

From Lou Harrison to Philip Collins’ New Music Works to the Cabrillo Music Festival, Santa Cruz’s history as a breeding ground for avant-garde and experimental music is well known.

The final chapter in this particular story is Indexical, an organization and performance space dedicated to exploring and nurturing musicians and composers who operate beyond the margins of mainstream music.

Indexical has now taken a big step forward in connecting musicians and audiences by partnering with the Kuumbwa Jazz Center. Indexical’s executive director, Andrew Smith, said he and Kuumbwa’s Tim Jackson have come to an agreement to cross paths with Indexical artists in Kuumbwa about once a quarter (four times a year). “Hopefully we can organize something that’s more on the fringes of what Kuumbwa would normally feature in their jazz lineup,” Smith said.

Smith said that when he attended shows in Kuumbwa, he regularly saw “at least a dozen” people he also saw at Indexical shows. As for Kuumbwa audiences who are likely unfamiliar with Indexical, Smith said he hopes “we can explore the far reaches of the jazz world a little bit more.”

This exploration begins with the first Indexical/Kuumbwa co-presenter, saxophonist Nicole McCabe and bassist Logan Kane, who will perform in Kuumbwa on February 17 and the next night at Indexical’s performance space at the Tannery Arts Center.

In other news from Kuumbwa, the annual tradition of Tuck & Patti performing on Valentine’s Day is coming to an end, after more than 20 consecutive years. Kuumbwa has announced that this year’s Tuck & Patti Valentine’s Day show will be postponed to April 11. In 2021, the bright duo of Tuck Andress and Patti Cathcart performed live, but not in person, playing a virtual show from their Bay Area home on Valentine’s Day. This time, however, the duo said in a statement, “We hope you’ll join us in celebrating Valentine’s Day in April.”

In local theater we are used to seeing local actors working with local directors in local venues. But they usually work from a script written by a decidedly non-local writer. This year, two Santa Cruz playwrights get a big boost when Santa Cruz theaters perform Santa Cruz plays.

The first such example comes March 30, when Jewel Theater debuts comedy “Remains to Be Seen” by Santa Cruz-based playwright Kate Hawley, who you may recall was responsible for the “pantos.” of the holiday season once staged by Shakespeare Santa Cruz a few years ago. “That remains to be seen” also has an onstage pedigree, with former SSC Artistic Director Paul Whitworth and current Santa Cruz Shakespeare Artistic Director Mike Ryan joining the cast. This production until April 24 at the Jewel.

Then, a few months later, Santa Cruz Shakespeare will stage a play entitled “The formula,” written by Kathryn Chetkovich of Santa Cruz. “The Formula” is inspired by Shakespeare’s “A Midsummer Night’s Dream” and the science of biochemical attraction. The game opens mid-July and runs through August at The Grove at DeLaveaga.

Both pieces are also world premieres. Stay tuned for more from Hawley and Chetkovich as we approach opening night.

Fall in love with classical music – The Prospector