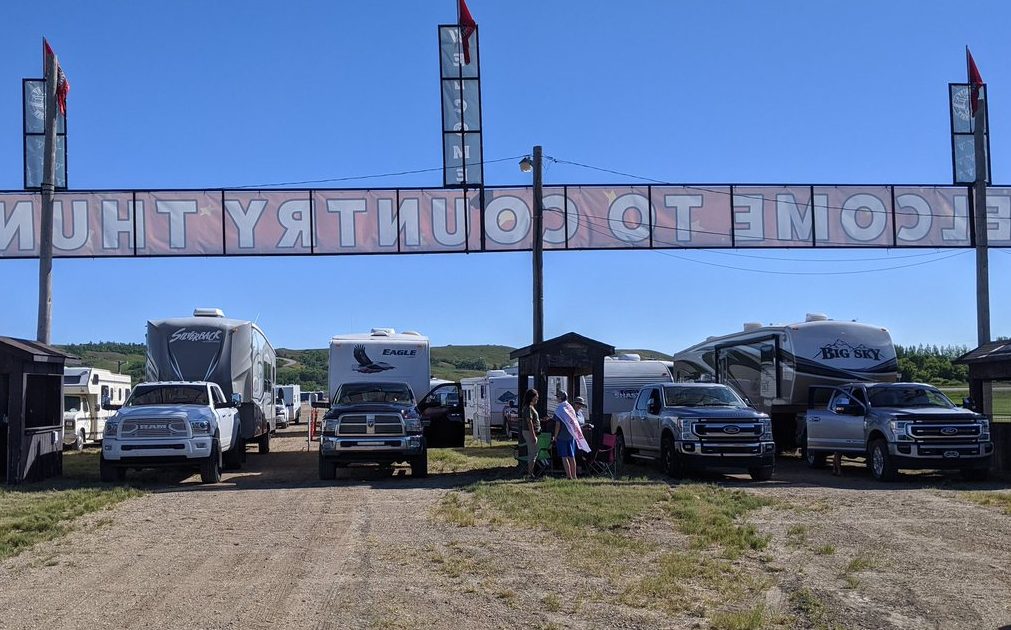 Campers line up to enter the grounds of Country Thunder Saskatchewan in Craven on July 12, 2022. (Shane Clausing/980 CJME)

After a three-year wait, Country Thunder is back in Craven.

The festival has been a staple in Craven for decades and brings together country music fans from across the province for four days of fun.

On Tuesday morning, about 30 country music fans had the chance to choose their campsites for the next few nights.

Albert Fandrick says he was so excited to walk through the doors that he started looking forward to Sunday.

“I always used to come on Sundays. They usually have the door open on Sunday or I walk in the door early Monday morning,” he explained. “Last time I was here at Country Thunder I was No. 1 on deck. That’s why I try to get here as soon as possible.

Fandrick said he’s been coming to the festival for decades and mentioned he looks forward to seeing all the top country artists, including Blake Shelton.

Another fan queuing to secure her camping spot for the week was Crystal White. White mentioned that she never missed a single edition of the festival in her lifetime.

“We came the very first year and we never missed it, so we’ve been here every year,” she said.

White arrived at the festival grounds just after 8 a.m., so she could secure her spot and avoid the larger crowds on Wednesday and Thursday.

Although it’s hot outside, White suggests the best game plan for the festival is to go at your own pace.

“I’ve been here before, so you just gotta go with the flow and have fun,” she added.

She mentioned that the festival had almost become an unofficial family reunion for her and her husband.

“All the people camping around us, we all know them now,” she said. “We have friends, (we) visit and it’s very good.”

Kim Blevins is the General Manager of Country Thunder. She is originally from Saskatchewan and is responsible for the company’s seven events across North America.

Blevins says she’s thrilled to be helping put on a show in her home province again.

“This one is still home,” she said. “All of us who organize the seven Country Thunders are from (Saskatchewan). It’s cool to be back here (and) cool to be on this site because that’s where it all started.

According to Blevins, work has been underway for months to get the site back in good standing after it was largely abandoned since 2019 due to the pandemic.

“The old girl hasn’t had much love for the past two years, but it’s coming together,” she said. “People are going to be really happy when they come here and we’re getting ready for the doors to open.”

Although the setup for the big show went smoothly, Blevins mentioned that there were a few bumps in the process.

“It’s like everyone these days. Everyone faces fuel costs, labor shortages, and equipment shortages. The list goes on and on,” she said. “We also faced those.

“But we have some pretty resourceful people on our team and they managed to get what we need to get this event going again. (Delays affecting) Air Canada, this crisis is affecting us a bit and bringing people here, but they end up getting here.

Blevins couldn’t say how many people would be in attendance this weekend as ticket sales are still ongoing, but she thinks there will be large crowds given the lineup the festival has put together.

The festival runs until Sunday evening.