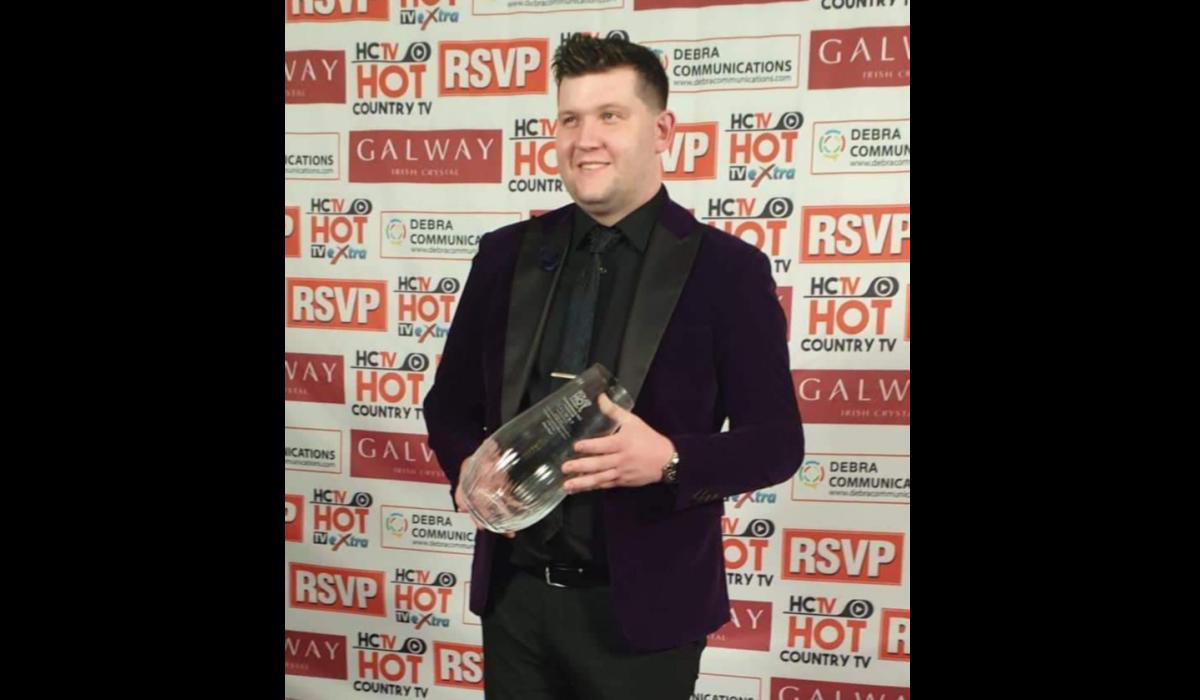 Alex, who received the Larry Cunningham Music Inspiration Award at the same event in 2019, was presented with his award by host and Hot Country TV founder Hugh O’Brien at the Slieve Russell Hotel last Tuesday evening.

Alex commented: “I am very grateful to receive this award, it means a lot to me. Hugh has supported me since the beginning of my career, as he has for so many others. I remember the first times I had the opportunity to perform at the Hot Country Awards and it was such an amazing platform for a young artist or someone who is new to the scene. Not only can you sing in front of a large audience, but almost all of Ireland’s biggest names are also in attendance in the evening, as well as overseas performers, so it’s always a great occasion.”

“We have all been looking forward to this night again, especially after the past two years. So in addition to saying a big thank you for this award, I also want to say a big shout out to Hugh and his team for making the show even better. big and better than ever this year. It was a pleasure to step back onto the Hot Country stage and pay homage to one of the country’s greatest artists, the late Charley Pride. And of course, it was also nice to be able to share this moment with another Midlands man in Colin Kenny,” Alex continued.

Alex is also gearing up to perform a benefit concert in Ukraine this week. He will perform at a special Voices For Peace fundraising concert at the Tuar Ard in Moate on April 14.

“It’s really heartbreaking to see everything that’s going on and to feel like there’s nothing you can do about it,” Alex said.

“But as a performer and an artist, one thing we can always try to do is use our platform to draw attention to things or to help worthy causes. So I didn’t shy away from join this concert. I hope we will see many familiar faces join us in Moate so that we can all do our part in using our voices for peace.”

Tickets for this show on 14 April cost just €20 and are available from the Tuar Ard website, www.tuarard.ie, and from the box office on 090-6482042 (please note that a booking fee will apply to tickets purchased online, but NOT tickets purchased over the phone at the box office). Tickets are also available from TRAX Record Store at the Bridge Centre, Tullamore, and from Tormey Butchers in Tullamore.