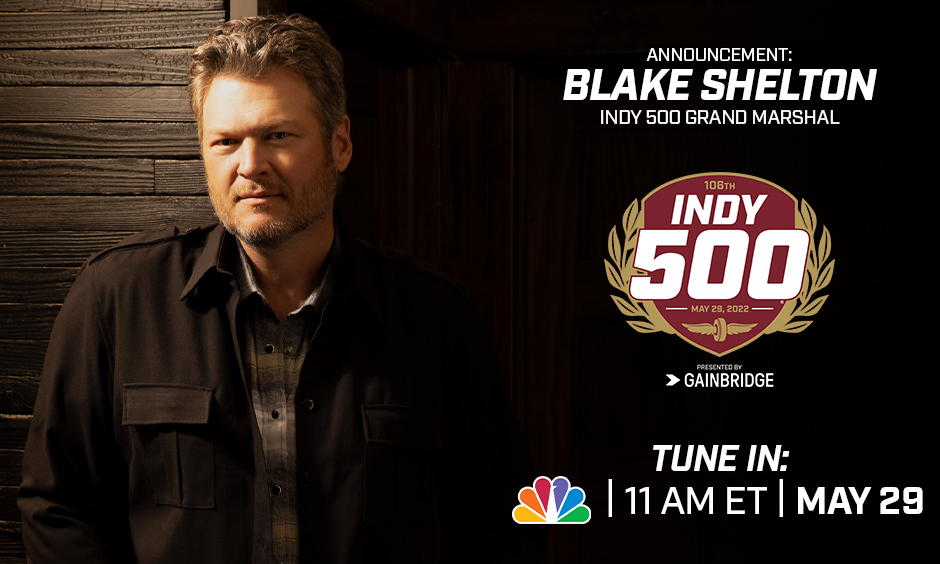 Blake Shelton, country music superstar and coach of NBC’s “The Voice,” will be the grand marshal for the 106th Indianapolis 500 presented by Gainbridge on Sunday, May 29 at Indianapolis Motor Speedway.

As Grand Marshal, Shelton will give the traditional order for drivers to report to their cars at official pre-race ceremonies and walk the Indy 500 red carpet.

“Blake is a country music powerhouse and a good friend to motorsports fans everywhere,” said IMS President J. Douglas Boles. “For spectators on the track and for anyone watching on NBC, his winning energy will be perfectly matched to the intensity of ‘The Greatest Spectacle of Racing’.”

Shelton visits the racing capital of the world as a guest of NTT INDYCAR SERIES driver Jimmie Johnson. The two icons have collaborated on the design that Johnson will use on his helmet on race day.

Shelton continues to add to his superstar status with the deluxe version of his new album “Body Language,” out now. The album features his 28th country radio chart, “Happy Anywhere” (featuring Gwen Stefani). Prior to “Happy Anywhere,” Shelton and Stefani celebrated a 2x Platinum, multi-week No. 1 with “Nobody But You,” which has now reached 475 million global streams. The single made its television debut at the 62nd GRAMMY Awards, where Shelton was also nominated for Best Solo Country Performance for his hit “God’s Country”. The 4x Platinum smash won the 2019 CMA Award and the 2020 ACM Single of the Year Award.

As his awards approach the hundreds, Shelton remains a force in the industry with ACM (five), AMA (three), CMA (10), CMT (11), and People’s Choice Awards (seven), among many others.

As a trainer on the Emmy-winning TV show “The Voice,” Shelton is an eight-time champion, most recently with competitor Cam Anthony. He and Carson Daly recently revealed they will be teaming up to produce and star in a new celebrity game show, “Barmageddon,” airing on USA Network.

NBC’s live coverage of the Indianapolis 500 presented by Gainbridge begins at 11 a.m. ET on Sunday, May 29.

Visit ims.com to purchase tickets for the 106th Indianapolis 500 presented by Gainbridge on Sunday, May 29 and for information on the full May schedule at IMS.

Who was Alberto Ginastera? A Guide to the Argentinian Composer