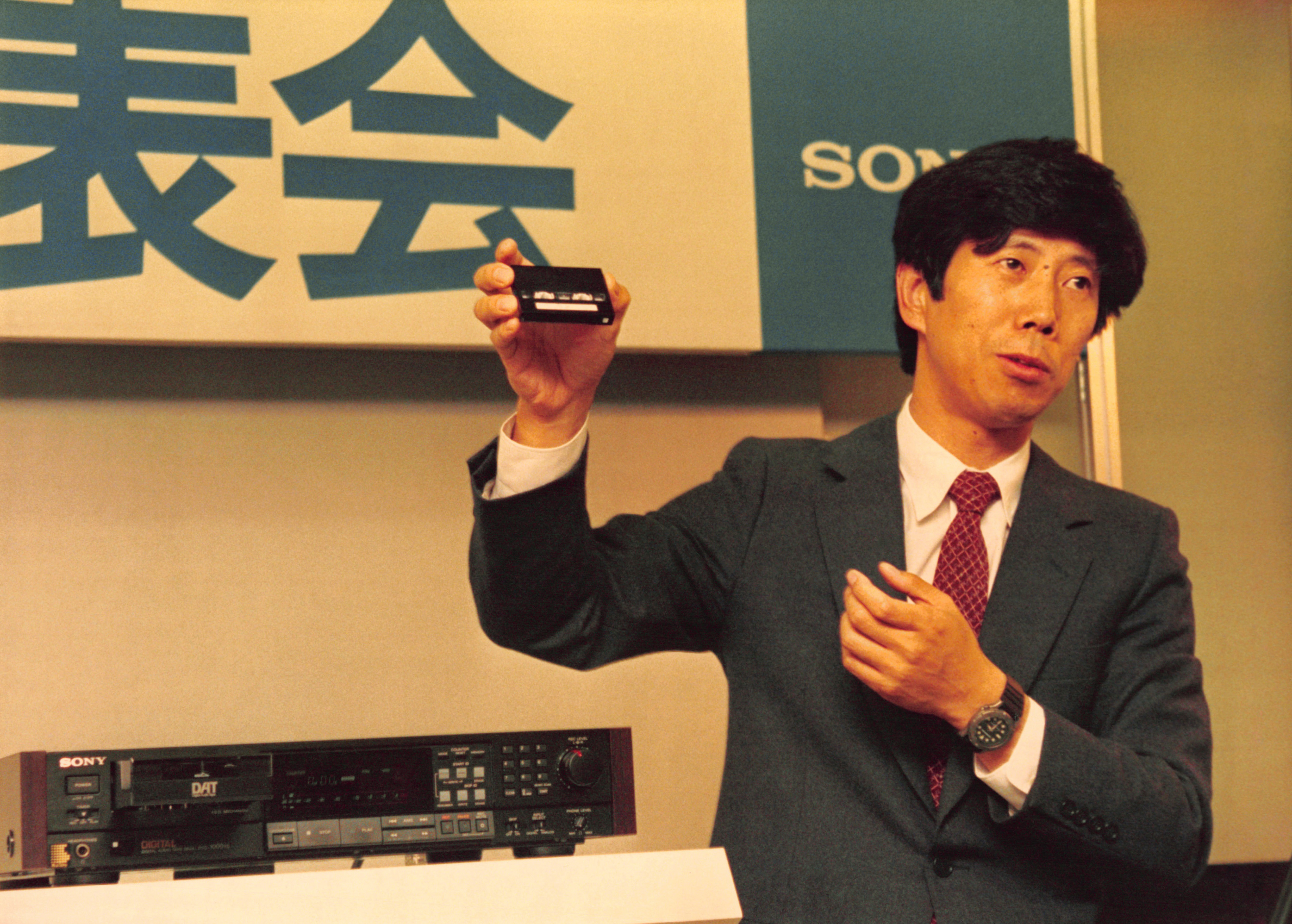 How Sony paved the way for modern music production

On May 7, 1946, Masaru Ibuka and Akio Morita founded â€œTokyo Tsushin Kogyoâ€, the company that would later become Sony. From its beginnings in the manufacture of tape recorders and transistor radios, it quickly developed into a myriad of industries. From its â€œMy First Sonyâ€ line to early cameras, from virtual reality headsets to digital audio cassettes, Sony has always tried new things, with varying degrees of success. On the occasion of the company’s 75th anniversary, we’ve put together a series of articles about our experiences with some of its most interesting and unusual products.

Sony’s contribution to the way we consume music is immeasurable. Whether it’s compact discs, the ubiquitous Walkman, MiniDisc, or the latest wireless speaker setup, Sony’s fingerprints are everywhere. Add the company label, and arguably it becomes the tech brand with the strongest musical heritage (sorry, Apple). But there is one important contribution the company has made that you might not be so familiar with. A format that sets the stage not only for digital music as we know it today, but also for the music you actually listen to: DAT.

Digital audio tape was not the first non-analog format; it wasn’t even really something that ended up in the hands of consumers – your dad probably didn’t listen to Dire Straits on it (CDs predate DAT by a few years but wouldn’t eclipse vinyl until later) . However, you’ve almost certainly been touched by his legacy, and he might even be partly responsible for the music you love today.

Invented in 1987, the concept was initially difficult to understand in a predominantly analog world. During this time, the main ways of consuming music were cassettes, CDs, vinyls, and the radio. The last three were reserved for mainstream artists with recording contracts and marketing budgets. The humble tape was accessible to amateurs, but you still had to distribute your garage-recorded magnum opus lo-fi for a few more years until MiniDisc and recordable CDs became mainstream. There was no SoundCloud or Spotify of course – â€œsharingâ€ was a very literal, in-person concept.

DAT tapes were smaller than the ubiquitous compact tapes, but could only be played on one side (no flipping for the second half of the album). Importantly, they recorded in “CD quality” (44.1 or 48 kHz / 16 bit), unlike other newer digital formats like MiniDisc and DCC which used compression.

DAT did not facilitate physical sharing. It barely solved many of the practical problems of ordinary cassettes. Of course, you could make perfect copies, 1: 1 and – gasp – skip tracks at the touch of a button, but the equipment needed to play them rarely found a place in popular Hi-Fi separations and the music industry was very happy with it (with perfect digital copies to win, who would buy their records, he rightly worries).

In fact, the recording industry was so concerned about the potential threat to their business that they initially campaigned against the sale of DAT machines in the United States. One of the main plaintiffs in this case was CBS records, which Sony eventually acquired, thus negating the problem somewhat (although some practical steps were taken to make copying the original recordings less efficient). In the end, it made sense at the time, but the recording industry was going after a minnow and hadn’t anticipated the shark circling the internet.

What DAT made to do was to bridge the gap between the chamber producer and the record press. The release of the format coincided perfectly with a new way of making music. Anyone with an Atari and a little patience could produce a track at home with software like Cubase or Notator. But there was still a big hurdle if you wanted to release it on vinyl (the most important format for the booming electronic music scene of the time). Squeezing a vinyl record probably meant going and paying for a professional studio and having a master recorded on a bulky reel. DAT has erased this barrier. Now all you needed was either a DAT recorder or (more likely) access to one and you could cut a recording from that.

For emerging genres like House, Techno, and Drum and Bass in particular, this was a paradigm shift, allowing artists to guide their music from their tinkered studio to turntable with relative ease. More importantly, they could do so with a format that technically never went downhill. DAT was always a form of tape and therefore subject to the vagaries of the elements if not handled or stored with care.

For the bedroom producers of the day, not only did this make the process more accessible, but it sometimes kept the music from fading into thin air. â€œWe couldn’t even afford to put money in the electric meter to be able to save a track. At the time, we were using floppy disks. And recording a track sometimes takes 40 minutes, if you have about 14 records, and sometimes the electric runs out halfway, â€famed Drum and Bass producer Roni Size told Engadget. â€œSo you only have one version on a DAT tape of this recording. So you would just run with this version on that DAT and that’s it. Yes, there was a time when it took 40 minutes to save a track and if that failed (as it often did) your only save was the DAT recording.

The emergence of this new format also began to change what was possible musically, according to Size. â€œThe DAT tapes were a way for us to master our music to a certain extent. Something that would have been expensive (and prohibitive for most emerging producers). “We could take it to places like Music House, and they could overpower it for, you know, for home studio prices, rather than dreaming of going somewhere where they’ll charge you for say Â£ 200 off the time.” Music House – a specialist in unique and press-tested dubplate records – was a fundamental part of the British underground music scene in the 90s.

It may still seem like a lot of work. If you want to create and publish a song today, you can probably do it all from the very device you’re reading this article on. Not so much in the mid-90s. You still needed some external gear, a mixer, and the professional services of something like Music House, even just to get a single playable version of your new track for the club tonight. -the. Oh, and a well-powered prepaid electric meter in the case of Roni Size.

But the sophisticated new digital band has not only removed some of the barriers for aspiring producers and DJs, it has allowed new sounds to emerge. â€œThis whole dubplate culture was how we learned about mastering. You learn that you could not put certain frequencies in a record because you will damage the head on the Neumann press [record lathe], those are all the things we learned and once it went digital we learned that you could put 40 hertz, you could put 20 hertz if you wanted. According to Size, then, DAT has contributed in a tangential way to putting the â€œbassâ€ in Drum and Bass (and therefore, many other emerging genres).

It’s hard to imagine today, with our frictionless access to everyone and enough computing power in our hands to make and mix a record on the bus, that making and releasing songs took a relatively gargantuan effort. . The 1990s in particular would slowly tackle each of these obstacles. First with the PC becoming more affordable, then the rise of software instruments which, naturally, would soon be cracked and shared for free. By the end of the decade, for minimal expense on a computer, you could be in the music game, reaching a large audience that a few years earlier would have been unimaginable.

It didn’t mark the end for DAT, however. Not yet, in any case. As more and more styles emerged, the use of the medium persisted. In the late 90s, new genres like Dubstep still used the master record sharing format so that DJs could cut their own dubplates. A habit that will continue into the new millennium despite the emergence of inexpensive home CD burners. Particularly, because you couldn’t play a DAT at a club, something you could do with an unmastered CDR that was equivalent to playing a YouTube rip to a live audience. Horrible.

It was not just the underground scenes that kept the dream of digital audio tape alive. Dr. Dre preferred to mix his productions directly on DAT until the end. So, it’s fair to say that DAT’s legacy has deep ties to the most popular genre on the planet. And if it was good enough for Andre Young, it was good enough for anyone. That is, until Sony abandoned the new recorders around 2005, signaling the natural decline in its use.

DAT didn’t do it all on its own, but it was the first digital domino in a chain of events that was going to bend the music industry in ways we can’t even imagine today. . But this first domino is vital, because it ushered in a new era where anyone could try and bring their music to the world in ways that were not possible before. Entire genres would come out of bedrooms and basement studios over the decade, and Sony’s digital tapes were a vital springboard in their imaginations and creation.

There have been many formats over the years that have seen more commercial success, but DAT was in the right place at the right time for a changing music industry. The majors were on the verge of having a prosperous decade to sell your music back to you on CD, and home production equipment was just accessible enough for must-see heroes to do the unthinkable – create and release their own electronic music side by side. coast with the major. Labels. You can then, at least in part, thank Sony for much of the electronic music you hear today.

All products recommended by Engadget are selected by our editorial team, independent of our parent company. Some of our stories include affiliate links. If you buy something through any of these links, we may earn an affiliate commission.