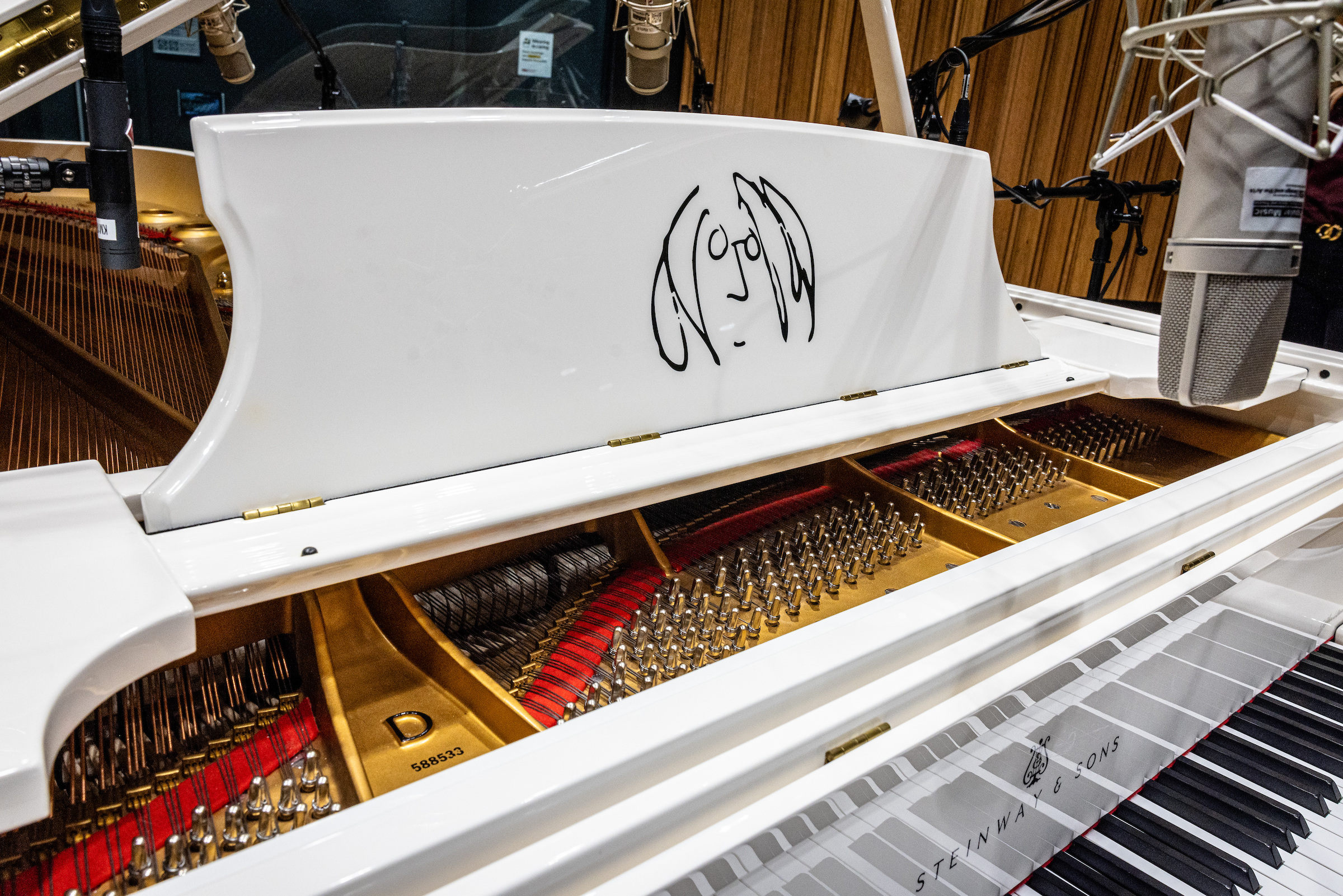 The spectacular instrument, signed Yoko Ono, has an incredible history. The latest chapter in its history is its donation to ASU by former student Jeanne Blanchet, author and musician.

From now on, the concert piano will be made available to students and teachers of the School of Music, Dance and Theateras well as everyone recording in the new studio in the Fusion on First building.

Erin Barradirector of the popular music program, said she was thrilled when she heard about the donation.

“I was excited about the possibilities and what it meant and meant to have an instrument like this in our program,” she said.

“It’s really about what the piano represents, and to me it represents the power of a song and a dream, and in many ways what better north star for any student or working person in our spaces to signify along the journey of what is possible in your life and the power of music and songwriting.

Blanchet had the piano for about a year before deciding to donate it to ASU.

“I liked it a lot, but we moved to another place and there wasn’t really room. And it’s such a wonderful instrument that it shouldn’t just be in a private home tucked away in the corner of a room,” said Blanchet, who earned a master’s degree in Asian studies from ASU.

“That’s when I thought it would make a nice gift,” she says, happy that students and teachers alike could benefit from it.

Jeanne Blanchet played the piano every day when it was at home. But when she moved, she decided to donate the instrument to ASU, where it now resides in the new Fusion on First recording studio in downtown Phoenix. Photo by Charlie Leight/ASU News

‘I can’t believe this’

In 2010, the Steinway company produced 175 pianos in its limited edition “Imagine” series to mark what would have been the 70th birthday of John Lennon, who was shot and killed in 1980.

Imagine pianos were inspired by the white Steinway grand piano that Lennon presented to his wife, Yoko Ono, on her birthday in 1971.

ASU’s piano was the first produced in the “D” models, 9-foot grand pianos, and – like the others – includes a plaque with the opening notes of the song “Imagine”, a plaque with Lennon’s signature and an illustration of Lennon on the music stand.

As Blanchet tells the story, the piano was purchased by Bernadette Gietka, a woman from Maryland who won a $183 million lottery in 2003. Gietka wanted Yoko Ono to autograph the piano, which Ono agreed to do. after Gietka donated money to the John Lennon Educational Tour. Bus project. As the story goes, Ono slipped into Steinway’s production facility through a loading dock door, autographed the piano with a Sharpie, and exited.

Gietka died in 2014 and the piano sat in a warehouse for several years until it went to a Steinway dealer, who listed it for sale on eBay, where Blanchet saw it.

She had the instrument shipped to her home in Scottsdale, where she played it every day.

“As my background was in classical music, I played Chopin, Rachmaninoff and of course Beethoven, my favourite,” she said.

After Blanchet decided to donate to ASU, Rick Florence, the head piano technician for the School of Music, Dance, and Drama, went to Blanchet’s to check out the piano.

“When I first sat down and played a few notes, it was obvious that it was a very nice musical instrument. It had a really nice tone and it was in immaculate condition,” a- he declared.

The piano arrived at the brand new Fusion on First building in October. The piano movers removed the legs from the body and rolled it sideways around the room.

“Rows of students lined up to watch them move the piano,” Barra said.

“Then there was a line to sit and play. I had to be the first person to play it, so it was very exciting. 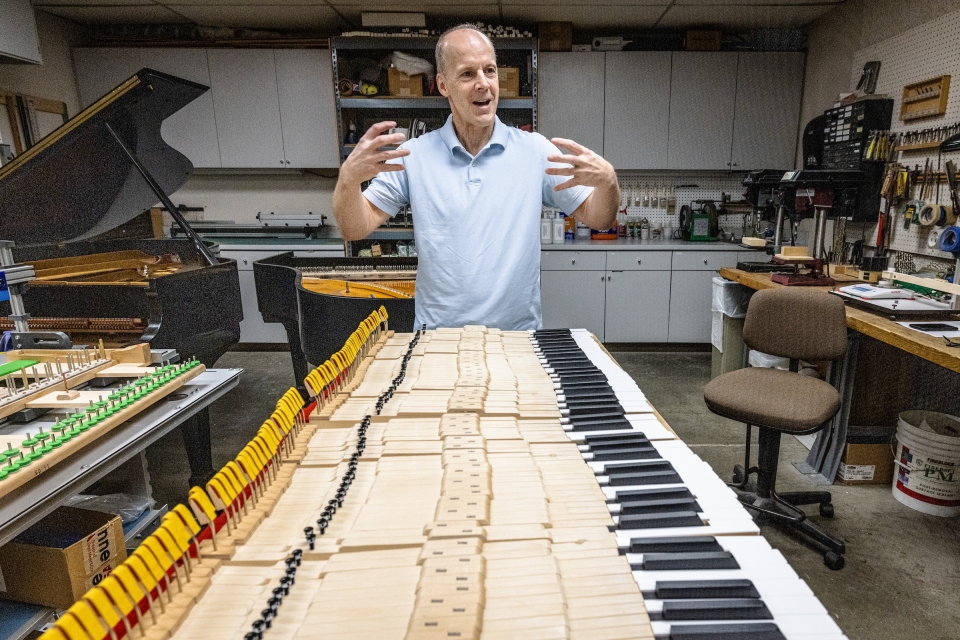 Rick Florence, the School of Music, Dance and Theater’s lead piano technician, has rebuilt all of the hammers for the “Imagine” piano in his store on the Tempe campus. Photo by Charlie Leight/ASU News

Shortly after the piano arrived, Florence took it apart.

“One thing I was looking forward to doing is bringing the piano action into my store and optimizing it so that we can pull out all of these great sounds that the piano is capable of producing,” a- he declared.

Florence removed the “action” of the piano – the keys, the hammers hitting the strings, and the thousands of parts in between. The action slides out of a piano like a big drawer, so Florence can take it to her studio on the Tempe campus. There he milled all new hammers, then tuned the piano – using a balancing system that changes the ratio of the movement of the keys and the hammers.

It’s a complicated and delicate interaction of physics that involves more than just tuning, said Florence, a third-generation piano technician.

“When you tune a piano, you change the tension of the strings. It does not affect other parties,” he said.

Tuning a piano without adjusting it is like putting gas in your car but doing no other maintenance. All pianos in the school have a regular maintenance schedule.

The frequent attention is for the benefit of the performers, who have studied their craft for years.

“They’re at the mercy of the pianos, the venue, the skill of the technician and things that are totally out of their control, but they’re judged on how they play,” he said.

“They deserve a piano in perfect condition.” 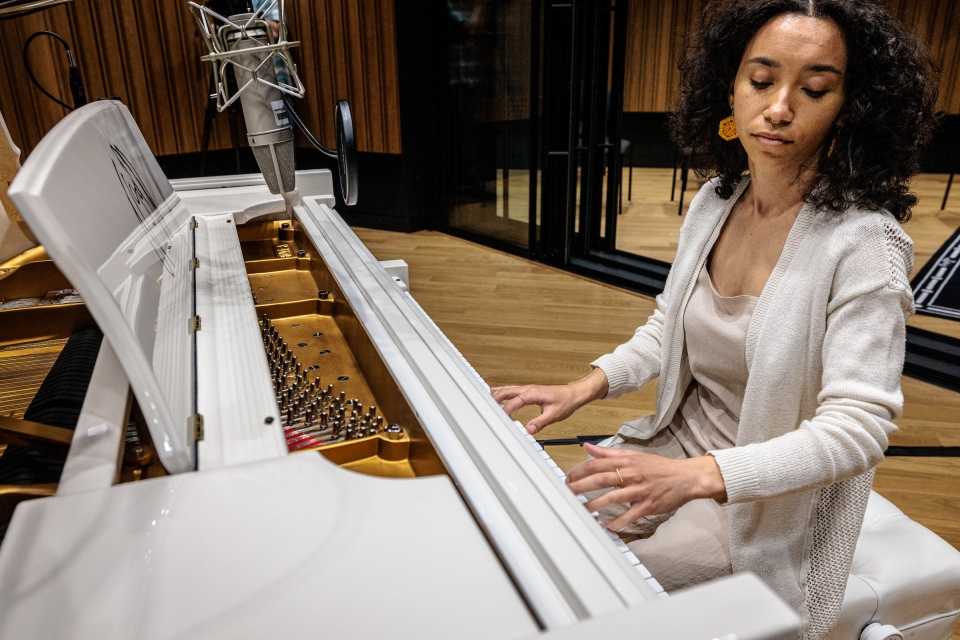 The piano is in one of three “concert rooms” in Fusion on First’s second-floor recording studio. When designing the studio, ASU worked with the Walters-Storyk Design Group, which has designed many famous studios, including Jay Z’s Roc the Mic studio in New York.

“It’s acoustically impeccable. The floors are floating and it’s connected to two other concert halls, so we can record everything from a symphony orchestra to a single vocal piano,” said Barra, an assistant professor in the School of Music, Dance and theater.

The popular music program, now in its fourth semester, has about 100 students, and Barra expects it to reach about 250.

“The Popular Music program is a contemporary, industry-focused program that offers space for all types of musicians, from traditional instrumentalists to students who express their musical sense through technology or composition,” she said. declared.