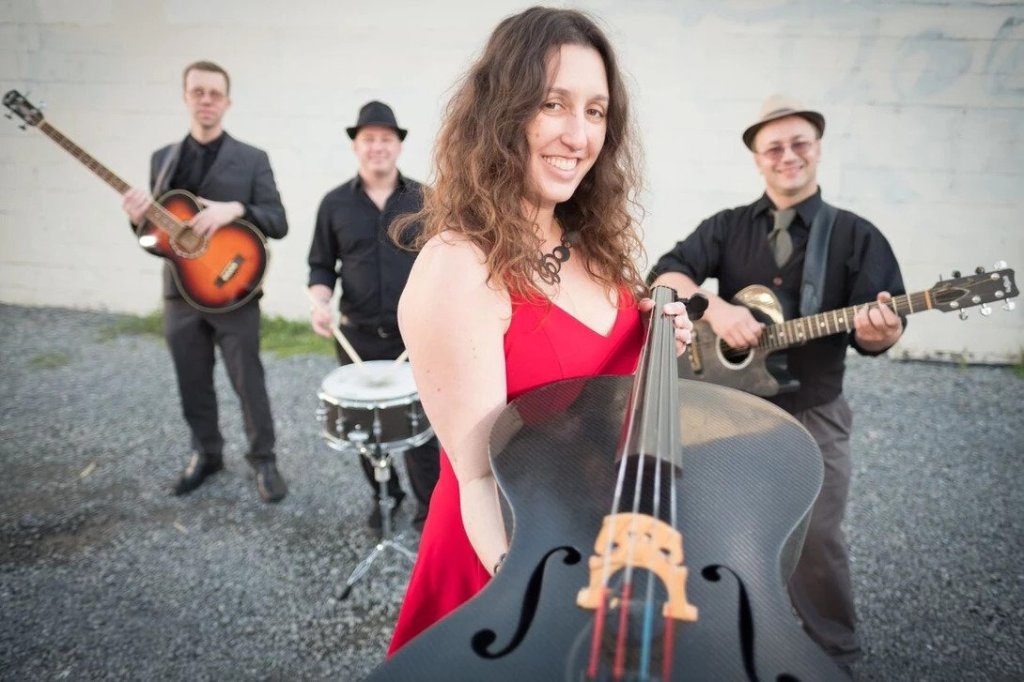 Rebecca Roudman began playing cello as a child at Terra Linda, performed with the Marin Youth Orchestra, studied classical music in college, and is now a member of the Santa Rosa and Oakland Symphonies.

Everything is fine. But being a successful classical musician was not enough for her. Roudman wanted to shred, just like the meanest rock guitarists.

“I wanted to let my hair down and do something totally different from the classic,” she says.

So, 11 years ago, she and her guitarist husband, Jason Eckl, formed a band, naming it Dirty Cello (dirtycello.com).

“I always thought of classical music as this properly played cello, and I didn’t want it to be anything like that,” she says.

They began by experimenting with rock and blues, jazz, bluegrass, Irish and Eastern European music, a bit of everything.

To gain experience and visibility, they performed wherever they had it, often for free, but not always. A cafe paid them in pastries. They might not be making any money at first, but they were building a fanbase. Within months they were popular enough to sell out the Throckmorton Theater in Mill Valley.

“People wanted to hear something different, and Dirty Cello certainly is,” Roudman says. “If you want to hear your favorite guitar songs played on a cello, it’s quite a unique experience.”

A rock band led by a cellist is not uncommon, but you can count them on your fingers. And there’s more to Dirty Cello than the novelty of a rock cellist Jimi Hendrix, Led Zeppelin or the Rolling Stones. Roudman has earned a reputation as a committed and dynamic performer.

“Anyone who has been in an audience when Dirty Cello takes the stage knows that something unique happens every time cellist Rebecca Roudman and the ensemble come face to face with fans living, breathing (and screaming and screaming) “says a review in Strings magazine.

Over the past decade Dirty Cello has released half a dozen albums and toured the United States and the world, performing in Italy, Spain, England, Belgium, France, Israel , China and Iceland, where they once played in a silo used to process herring.

The Novato couple and their five-piece band Dirty Cello play a rare concert in their hometown at 7 p.m. Friday, kicking off the outdoor Sunset Series in Rancho Nicasio.

“Our philosophy is always that we rarely turn down a show and the weirder the better,” Roudman says.

This was especially true during the worst days of the pandemic. With concerts infrequent and spaced out, Dirty Cello managed to secure a reservation for an outdoor concert at a nudist resort near Santa Cruz.

“You could social distance and everyone was very respectful and kept their masks on – and nothing else,” Roudman recalled. “We kept our clothes on, but found the whole experience beyond distracting, especially when they got the hoops out.”

At one point, Roudman and Eckl became so desperate to perform that they asked the Oakland Zoo if they could come and perform for their captive audience.

“I couldn’t believe they actually said yes,” she said. “So we played for all the animals that were pretty much uninterested in us.”

Except for a little green Amazon parrot named Brock (short for Broccoli) who traded licks with the band to a blues tune. The video of the inter-species jam went viral and was featured on local TV news.

Now that Dirty Cello is on tour again, Roudman and Eckl hit the road every weekend with the same enthusiasm that first inspired them to swap classical music for classic rock.

“It’s funny because people think what we do is work,” she says. “But when you’re on stage and you feel the energy of the crowd and you’re smiling and they’re smiling, that’s not work, that’s just happiness. And that’s what we love. .

IF YOU ARE GOING TO

Freddy Fender is in the Country Music Hall of Fame