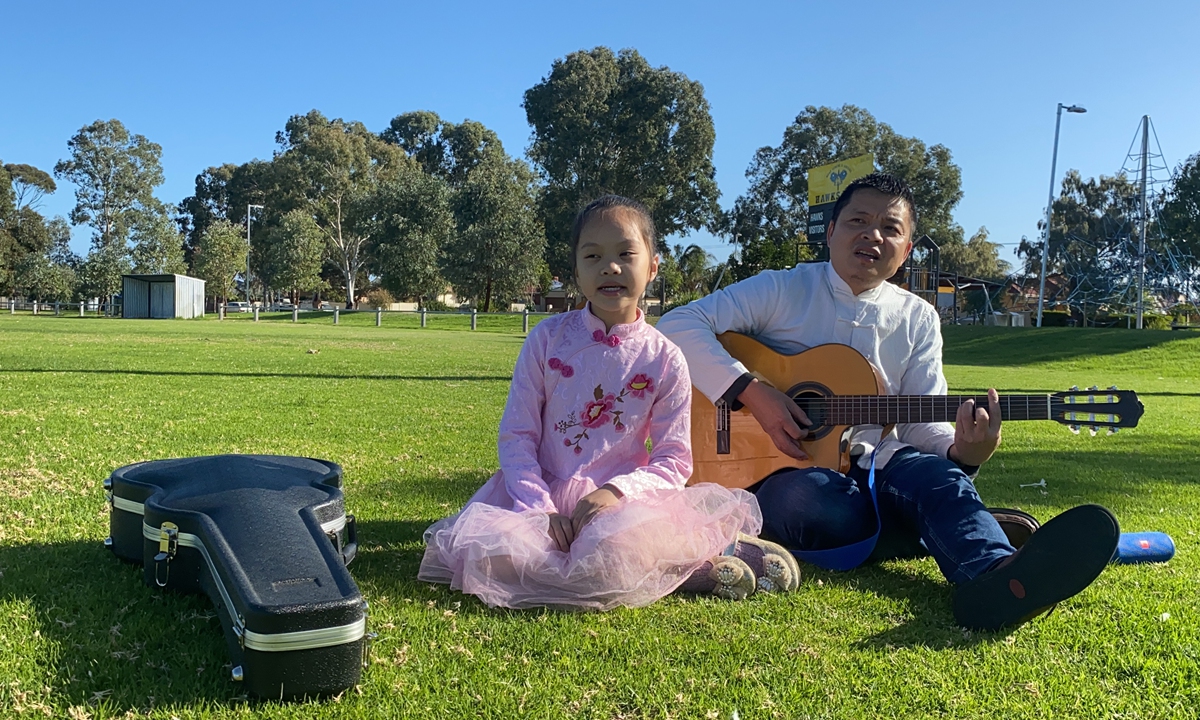 Abao (right) and her daughter Emily sing on the lawn. Photo: Courtesy of Abao

Serenating his daughter Emily in front of a camera with a guitar, Abao and Emily sing a famous Chinese ancient poem song, the music of which was composed by him. The lyrics of the song are familiar to most Chinese people, as they are taken from one of the most well-known ancient poems “A Quiet Night” by the great poet of the Tang Dynasty (618-907) Li Bai.

Abao, a Chinese teacher working in a public school in Australia, has set more than 60 ancient Chinese poems, the universal language of the world, to music so that his students can better appreciate these ancient works, considered the crème de la crème of the world. traditional. Chinese culture.

The teacher told the Global Times that the method has proven popular with these young people from very different cultural backgrounds.

It was not an easy journey to find the best way to put these poems to music. Abao noted that Chinese is a language of melody, while English is a language of rhythm, so how to get native English speakers to understand both the tone and meaning of these ancient poems was a challenge.

“The idea of ​​my creation is to use Western music as the framework for the Chinese traditional poem, so that the Chinese tones and melody can be very integrated. The Chinese people feel that it is very fresh, and the children who have grown up here can also accept it. These works have a Chinese classical beauty,” Abao added.

“O geese, o geese, o geese! You stretch your necks and sing your sweet song to the sky. Your white feathers float on the green water with ease. You swim in the clear waters with your feet webbed with red.”

This poem written by the Tang dynasty poet Luo Binwang is often included in primary school textbooks in China. Abao also included the ancient poem in his class after composing the music for it.

“I used reggae music to edit the song because the poem itself is lively and childish,” Abao said.

The brilliant tone and rhythm captured the young students’ interest, so Abao also added some moves that go with the meaning of the lyrics.

“They like to sing the song every day at school.”

Through the efforts of the teacher, these non-native Chinese speakers can sing some of China’s ancient poetry by heart.

Born in Guangxi Zhuang Autonomous Region in southern China, Abao is a member of the Chinese Zhuang ethnic group, which has a strong tradition of song and dance. On a more personal level, Abao acquired a keen interest in music as a child after watching his older brother play the guitar.

The seed of obsession with music helped Abao establish a teaching method that has proven effective in both China and Australia in making students fall in love with traditional Chinese culture and facilitating learning. languages.

Growing up, Abao taught himself to play the guitar. When he started teaching at Guangxi University as an English teacher, he started singing and playing English songs with his guitar to help students learn the language.

In 2010, Abao had the chance to go to Boston to teach Chinese. During this time, he used his experience teaching English to help his American students better understand Chinese. There were also challenges. For example, some words in Chinese are pronounced very differently when singing.

“I had to choose songs whose melodies fit well with Lo Tayu’s works,” Abao said, explaining that he researched hundreds of Chinese songs to find the ones that fit his class.

Finally, Abao was inspired to come up with his own method that allowed Chinese language and Western musical styles to merge.

“Abed, I see a silver light, I wonder if there is no frost. Looking up, I find the moon shining; bowing, homesick, I am drowned.”

The song adapted from Li Bai’s “A Tranquil Night” is one of the most popular works Abao has composed. He not only completed a Putonghua (Standard Chinese) version and an English version of the poem, but also a Cantonese version.

“Our ancient poems can bear the weight of human feelings no matter what language they are translated into,” Abao noted. He added that these feelings, like the homesickness contained in Li’s poem, are common to people all over the world, so they can easily resonate with people.

Abao edited all three versions of “A Tranquil Night” into a video which he later uploaded to social media platforms. The video won applause from netizens in China and abroad.

Some parents left comments under the video encouraging Abao to create more of these works.

“Ancient Chinese poems are so beautiful. Please write more songs for these poems so that I can have more educational materials for my children and help them learn Chinese culture,” one YouTube user wrote. .

Abao said his next plan is to write more songs about ancient Chinese poems and organize his Australian students to complete a musical that tells a story through those poems.

“It will be very amazing,” he said