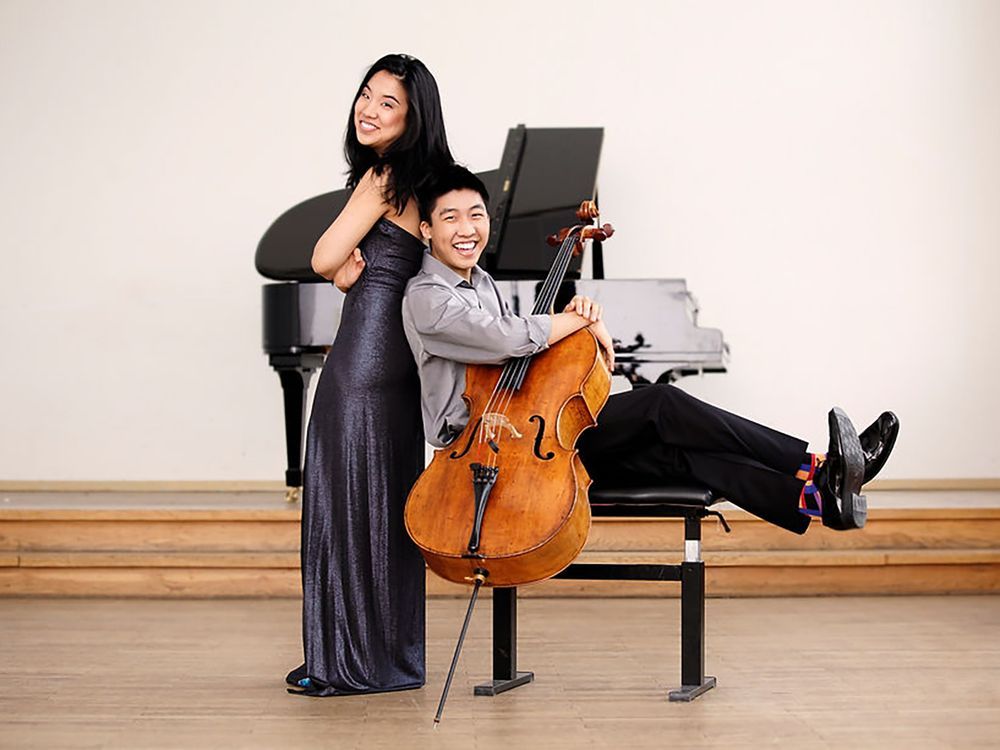 A critically acclaimed sibling duo will light up the stage at Sarnia’s Imperial Theater on March 23 with an eclectic mix of captivating classics and haunting modern fare.

Cheng2Duo – consisting of cellist Bryan Cheng and pianist Silvie Cheng – will perform The Russian Soul and Beethoven as part of the Sarnia Concert Association’s second show of the 2022 season.

Hailing from Ottawa, the siblings have won numerous awards over the past few years and have seen their reputation grow after wowing audiences with their musical mastery.

Attendees of the March 23 show will have the chance to see two musicians who are at the peak of their considerable abilities, said Sarnia Concert Association President Jim Elliott.

“I can’t wait to be there – I’ve been looking forward to this for years, ever since we first booked them to appear here in March 2020,” he said. “They couldn’t come because of the pandemic, but they agreed to come back…and I think it will be an exceptional performance. What is interesting is that over the past two years, Bryan and Sylvie have not been idle, as their reputation has grown over the past few years.

The siblings, who are now based in Berlin and New York respectively, said they are looking forward to their first performance in Sarnia. Cheng2Duo’s concert will be highly interactive, deeply entertaining and will include familiar and more obscure compositions that will charm the audience.

“We love connecting with our audience first and foremost, whether it’s through the music itself or the intros – we really love talking about the pieces, the context of those pieces, and some personal anecdotes,” Bryan said. “Overall, it will be an intimate and engaging experience for everyone involved.”

“What we’re trying to do is not just connect with classical music lovers, but people who might be hearing classical music for the first time,” Silvie added. “So we treat each of our gigs as a journey, like you would when you go to the cinema to watch a film – we translate those wonderful works from centuries ago as well as the (more contemporary) ones, taking everyone in this transformative journey to let people forget their worries.

As the title suggests, the show will feature a wide array of music that the Cheng siblings have carefully chosen to showcase their respective instruments.

“We like to present a diverse variety of music across different time periods,” Silvie said. “When we first thought of the concept for this show two years ago, it was actually Beethoven’s 250.and birthday. We therefore wanted to celebrate his legendary strength as a composer, especially for our cello and piano instrumentation. He was the first composer to treat cello and piano as equal partners. And you’ll hear him very well during the concert… he was very innovative, and that’s why we pay tribute to him.

“The last work on the program is by Francis Poulenc, a piece written by the French composer in the 1940s,” she continued. “It’s this magical, mystical piece of French Impressionist music and you’ll hear our instruments create all these timbres that come from the classical music tradition but really open up new worlds of sound.”

The couple only play music that stirs their own souls, Bryan said.
“In general, when we program recitals, we always perform pieces that are close to our hearts,” he said. “Most of the time we play music that we love so much it’s our favorite. Honestly, we wouldn’t be able to play this music if we weren’t so attached to it.
After two years of performing live, Bryan and Silvie said they were excited to return to performing in front of live audiences.

“We’ve done a few (virtual) gigs over the past two years, but there’s nothing like the feeling of a live audience. As performers, we feed off the energy of the audience, it’s just our lifeblood,” Bryan said.

“Especially since the start of the pandemic, the whole idea of ​​doing things live and in person with other people has been lost, that sense of community has been lost over the last two years,” Silvie added. “This concert was supposed to be presented in March 2020, so it was a long time coming.

“Audiences will hear music that may be familiar to them, but will also discover new gems, and that gives us joy – to be ambassadors for music that may not be heard often but deserves totally the star.”
Cheng2Duo will perform The Russian Soul and Beethoven at the Imperial Theater in Sarnia on Thursday, March 23. Tickets are available at the Imperial Theater box office (168 Christina St. N.), online at www.theatreimperial.net or by phone at 519-344-7649.

Masks are mandatory during the concert and seats will respect social distancing.